Why Guerrilla Marketing Must Evolve

The term “guerrilla marketing” was coined by American businessman Jay Conrad Levinson in his 1984 book of the same name.  The term draws on the concept of guerrilla warfare and it purports to outline a philosophy, a strategy, and a set of tools that can be used by small businesses to gain marketing traction despite their inherently low budgets.

The book was immensely popular, selling over 20 million copies worldwide and it continues to be required reading in many MBA programs.  Levinson’s origin story of the book is that the idea came to him when one of his students (he was a marketing professor at Berkeley at the time) asked him to recommend a book for marketers without big budgets.

The book sprang to popularity in a time when small business startups were burgeoning, driving a strong appetite for easily digested books on business topics for inexperienced entrepreneurs.  This appetite was further sated in the early ’90s with the launch of the popular “For Dummies” series of instructional/reference books which were intended to present non-intimidating guides on a variety of topics.

The idea of a guerrilla resonated with young business leaders since they fancied themselves as warriors fighting for survival against larger competitors with more resources.

Guerrilla warfare is a form of irregular warfare in which informally organized armed civilians or paramilitary forces are employed against a larger and more formally organized military or governmental force.  Guerrillas are glamorized or denigrated in books and movies, depending on the political orientation of the title.

One man’s partisan is another’s terrorist.

Roger’s Rangers were a band of skilled woodsmen who fought for the British during the French and Indian War.  They frequently undertook winter raids against French positions and they blended skills taught them by native Americans with pioneering skills.  This enabled them to fight in terrain and conditions that were difficult for traditional militias.  Because of the context, these irregular fighters (early American guerrillas) are seen as heroes of the time, but the British thought of them as terrorists.

In the American Civil War, the 43rd Battalion, Virginia Cavalry, known as Mosby’s Raiders, was a battalion of partisans fighting for the Confederacy.  They were famous for their unconventional tactics, conducting lightning raids on Union targets.  They played a significant role in the conflict, disrupting communications and supply lines and consistently eluding the Union Army.

There have been many examples of guerrillas throughout history, both those that fought on our side, commonly known and revered as “freedom fighters” or “the resistance” as well as those fighting for our adversaries whom we generally categorize as “terrorists.”

There are many definitions of marketing, but one that captures its essence well comes from Dr. Philip Kotler, the renowned author and the Professor of International Marketing at the Kellogg School of Management at Northwestern University: “Marketing is the science and art of exploring, creating, and delivering value to satisfy the needs of a target market at a profit.”

Guerrilla Marketing is often defined as “An advertisement strategy in which a company uses surprise and/or unconventional interactions to promote a product or service.”

There is a clear disconnect here – marketing is about delivering value and Guerrilla Marketing is a means of promotion.  In traditional marketing vernacular, promotion is an element of the “marketing mix,” but it is not a form of marketing that can stand alone.

Classic marketing competition can be understood by considering the battle over the past one-hundred years between Coca-Cola and Pepsi.  Both are big brands, backed by big companies each with enormous resources.  These companies attempt to position themselves as having the superior brand (and product) to gain market share and to capture as much revenue as possible.  Both companies use classic marketing methodologies, strategies, tools, techniques, and tactics in this battle for “share of wallet” with their consumer base.  This type of competition is symmetrical in that both sides have similar power and resources.

FiveAxis Marketing is an approach that is used when opponents’ power differs significantly.  This is often competition between a large, well-capitalized company and an emerging opponent that is much smaller with access to much fewer resources.

Think of David vs. Goliath.  In the biblical version of the story, Goliath was a 6-foot-9 Philistine warrior (absolutely colossal for the time) with shining armor and a variety of sophisticated weapons.  None of the Israelites wanted anything to do with a fight with him.  So, as the story goes, David hears of King Saul’s offer of a reward to anyone who defeats Goliath in battle.  So the skinny shepherd boy takes on the warrior with a stone and a sling.  David strikes him dead with a single shot – the ultimate example of FiveAxis warfare.

So, what Jay Conrad Levinson was trying to convey with guerrilla marketing is not about a ragtag bunch of irregular troops, with poor training and weaponry, often led by a despotic warlord, in the interest of winning a battle against a larger military force.  What he should have depicted is the battle between David and Goliath.

The essence of FiveAxis Warfare is leverage.  Not the overused form of the word in which everyone wants to “leverage their platform,” or “leverage the disruptive features of their new product.”  But, rather the form where Archimedes said: “Give me a lever long enough and a fulcrum on which to place it, and I shall move the world.”

Leverage in this context is about finding and using tools that provide disproportionate power when applied properly.  What small businesses need are strategies, tools, and processes that generate FiveAxis power.  When these FiveAxis resources are harnessed and applied, much like David, the underdog has better than a fighting chance at victory.  What they don’t need is a collection of “Guerrilla Weapons” as outlined in Levinson’s book - to try to scrounge up attention for their emerging brands.

FiveAxis Marketing is especially relevant in the modern world where traditional marketing tools and concepts lie next to their highly FiveAxis cousins in the digital marketing arena.

We bid farewell to the dated (and somewhat misinterpreted and misguided) concept of Guerrilla Marketing and welcome the rise of FiveAxis Marketing. 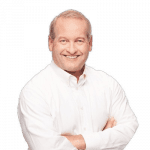 Mark A. Hope is the founder and CEO of FiveAxis Marketing – a unique agency specializing in building high-performing sales and marketing systems, campaigns, processes, and strategies for small businesses. FiveAxis has extensive experience with machine tool dealers and operators. If you would like some help in implementing ideas like these in this article, feel free to give Mark a call at 866-607-3593 or by email at mark.hope@fiveaxismarketing.com